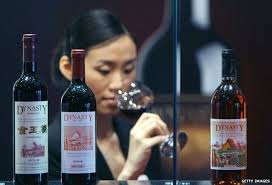 China has always had big markets and surprisingly wine has been added to the list with the tag of 5th largest wine market in the world. Growth rate has been tremendous of about 20% between 1996 and 2011, which seems to grow even more by 54% by 2015. Last Year, China has imported $1 billion worth of wine which makes 67.9 million Gallons from European union.

More interestingly Wine-drinking culture is predominantly seen in the middle class, which is around 69% according to a survey taken in China in the first quarter of 2013. They spend meagre amount of around 200 Yuan for the mediocre level of wine, which keeps the trend of wine consumption extremely high in China. Wine, which was once considered more of a symbol of status, is now taken for pleasure or a casual drinking. Its demand is meteoric that the investors don’t just want to snap away the bottles but acquire the French Vineyards as their own. It’s growing taste for Bordeaux has made it the largest export destination. Bordeaux interested many Chinese investors and it saw total revenues of 4.3bn euros ($5.7bn; £3.7bn;) in 2012, up 2% in volume and 10% in value on the year before.